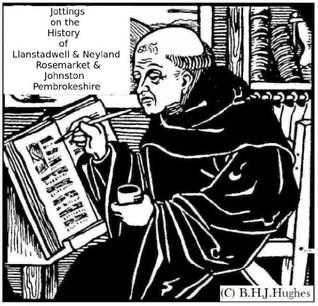 It is situated on the northern shore of Milford Haven, and comprises a considerable tract of fertile and well cultivated land, with some portions of hilly ground, which, from its steepness, is but ill adapted to repay the expense and labour of cultivation. Now a large portion of the land including the hilly part has been built on as part of the town of Neyland.RosemarketDescription by Fenton in 1811 “Proceeding to Ros Market, a village now of very mean appearance lying on the edge of a cheerful little vale well wooded and watered by a small stream, but which was once of more consequence than one would be induced to suppose from its present state , for in deeds which I have seen there are streets referred to in it.

Here Sir Richard Walter had a mansion, whose remains speak it to have been highly respectable about a century ago, and possessing all the appendages of a great mans house in those days.”Two ladies of historical note are associated with this village. One was a mistress although some say wife to a King and the other was a companion to Dr Johnston.JohnstonThe scenery is bleak and wild, with scarcely a vestige of foliage. The land lies high, commanding an extensive view of the surrounding country on all sides, and the weather-beaten church harmonises singularly well with the landscape.Once the Railway station for Milford but now just a haltJohnston Hall was, in the late 1700’s the home of Lord KensingtonThe town is Neyland once for a short period associated with shipbuilding but the in the 1850 expanded greatly with the advent of Brunel’s Railway terminus and the Irish Packet trade.Sadly that only lasted for just over 100 years then the new Cleddau bridge was built so the direct link via the vehicle ferry with Pembroke Dock also closed.

Now it is encouraging the tourist trade with a marina.

Comments
Comments for "Jottings on the History of Llanstadwell & Neyland Rosemarket & Johnston Pembrokeshire":